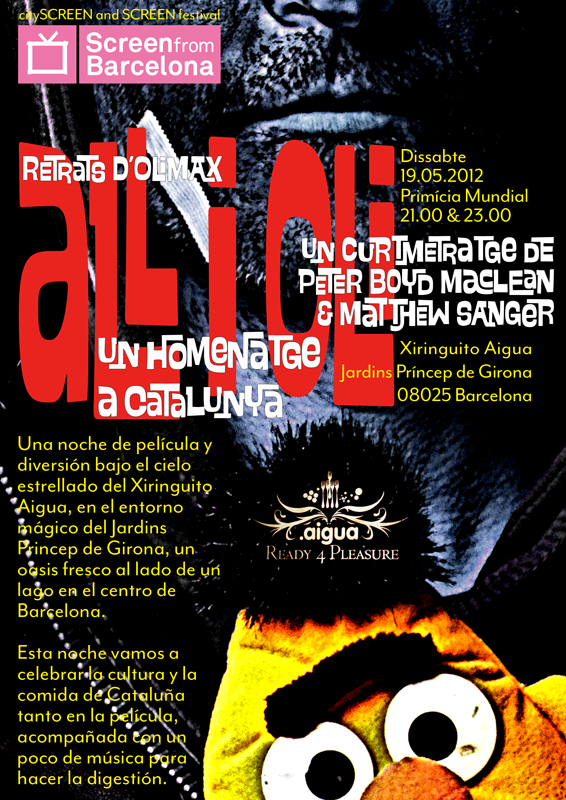 The film, All i Oli - A Homage to Catalunya, by Matthew Sanger & Peter Boyd Maclean was premièred as part of the influential the Loop Film festival and Screen from Barcelona. The setting was in the open air in Jardins Príncep de Girona at Xiringuito Aigua.

FILM SYNOPSIS
On 26th November 2011 English photographer Olimax, now resident in Barcelona, invited the public to participate in a mass portrait event at the Eat Meat gallery, Barcelona. Each subject brought along an object that symbolized Catalunya to them. At this event Olimax created portraits of 100 people, at an average of 4 minutes a shot. This is the film of that day.

Far more than just documenting the event though, the film presents a perceptive series of short essays on key aspects and traditions of Catalan culture, mixing the live action with extensive use of both modern and historical archive footage. This is reinforced by an atmospheric soundtrack of traditional and contemporary Catalan music.

LOCATION
The film will be screened under the stars at Xiringuito Aigua, in the magical outdoor setting of Jardins Príncep de Girona, an cool oasis by a lake in the heart of Barcelona. The evening will celebrate the culture and food of Catalunya as reflected in the film, accompanied by some twisted music for the digestion. Xiringuito Aigua is famed for its exceptional Catalan tapas with such specialities as Tallada de Bou amb encenalls de Foie, Anxoves del Cantàbric, Cap i Pota and their unique take on Patata Brava.

Taken from the press release